When we talk about SEO optimization, we often mention loading speed, quality content, and, of course, keywords. But won’t someone please think about transition words?

That’s right! Part of writing an SEO-optimized article is writing for humans. The Yoast plugin for WordPress, for example, makes sure you have enough transition words in your writing. This may seem to you more like an English exam but guess what? English class was actually useful after all!

Readability is a crucial aspect of your post and one of SEO best practices. In order to have good readability your writing needs to have:

But if you didn’t pay attention to your professor back in the day or need a bit of help to remember transition words, don’t worry! Here’s a list of transition words for SEO to boost your post rankings. And, just in case, a quick explanation of what a transition word is:

What is a transition word?

Linguistic says that a transition or linking word is a word or phrase that works as a bridge between sections of a text or speech. That is, transitions provide better cohesion and help the other person understand more easily what you’re saying.

Some very clear examples of transition words are “however” and “because”. Let’s see them in some context: “Julia always goes to the beach because she loves the sea. However her boyfriend hates it.”

As you can see, the transition words are in the middle of other sections. “Because” shows the clear cause-and-effect relationship between “always goes to the beach” and “loves the sea”, whereas “however” clearly points to the contrast with her boyfriend.

In that example, the transition words were, as I said, in the middle of the clauses. However, they can also be used at the beginning or at the end. Take a look:

There’s a famous quote that says “The whole is greater than the sum of its parts”. Well, using transition words allows the reader to perceive your ideas as a whole and not as just different parts put together.

Below there’s a list of transition words divided into categories. Keep in mind, though, that words usually have multiple meanings depending on the context, so one word can be considered in other categories as well. You’ll also find words that are more formal than others so again, context is important.

It is sometimes said that, in the first place, firstly, first and foremost, in this paragraph/post, with this purpose in mind.

Example: In this post, I’m going to discuss some reasons why patience is important when learning a new language.

Again, also, and, and then, another key point, as well as, as a matter of fact, besides, beyond, coupled with, equally important, further, furthermore, in addition, in detail, in like fashion, in the same way, in a similar fashion, lastly, next, not to mention, on top of, moreover, really, so, together with, truthfully, to say nothing of, too, what’s more.

Example: I didn’t know what to say so I just stayed silent.

As an illustration, at length, by the same token, for example, e.g., i. e., in this situation,  such as, for instance, like, particularly, take the case of, to demonstrate, to explain, to illustrate.

Example: There are many things you can do this week, such as going to the theatre or seeing a film.

After, afterward, always, and, at last, at once, at this time, before, concurrently, during, eventually, finally, (first, second, third…), following, formerly, henceforth, immediately, in a while, in the long run, in the meantime, later, never, next, once, presently, previously, prior to, shortly, since, still, so far, soon, straightaway, then, thereafter, till, until, when, whenever.

Example: He closed the door after she left.

Linking cause and effect

Accordingly, because of, as a result of, consequently, correspondingly, due to, for fear that, hence, inasmuch as, given that, given these points, owing to, on account of, this means, leads to, lest, results in, subsequently, next, therefore, thereupon, thus.

Example: The flight was canceled because of the bad weather.

In the event that, in view of, provided that, only if, not unless, on condition that, seeing that, so long as, under those circumstances.

Example: His kid studies for school only if he gives him $20.

Analogous to, both, neither, unlike, likewise, similarly, comparatively, compared to, at the same time, equally, identically, other than, on the one hand… on the other hand, on the positive side, on the negative side, except for, save for, vis a vis, unless, than, in the same vein.

Example: Both companies are very successful, they are having a great year.

Example: As I have said, transition words are super important.

That is, that is to say, in fact, in other words, in essence, to clarify, in brief, to rephrase it, to put it differently, in short, basically.

Example: I think we need some time. Basically, don’t talk to me for a while.

After all, albeit, as much as, however, although, contrarily, even if, even though, despite, in spite of, while, whereas, is even better than, regardless, but, then again, conversely, yet, nevertheless, nonetheless, nor, notwithstanding, even rather, though, apart from that, up against, whereas, while, while it may be true.

Example: While swimming is fun, I prefer running.

absolutely, above all, anyhow, anyway, anywise, by all means, certainly, chiefly, definitely, emphatically, evidently, explicitly, in any case, in fact, indeed, in particular, obviously, a point often overlooked, markedly, most compelling evidence, surely, surprisingly, undoubtedly, undeniably, unquestionably, without a doubt, without reservation, must be remembered.

Example: That color certainly doesn’t look good on you.

All in all, in conclusion, on balance, summarising, to sum up, wrapping up, overall, thus.

Example: In conclusion, you should use transition words in your posts.

The end of your post, however, requires more than a transition word. Check out our post on How to end a blog post to learn amazing ways to optimize your endings and increase engagement.

How to improve your use of transition words for SEO?

Now that you know which are the transition words, you might wonder how do you use them in your post to optimize SEO? First off, keeping this list handy is really useful. Especially the first few times you sit down to write. Eventually, you’ll learn the words and use them without even thinking about them.

Another thing that’s required to use transition words successfully is being structured. You might feel tempted to start writing and figure things on the go, improvising. While this is great for spontaneity, it can lead you to get lost and don’t have a clear understanding of how ideas relate to each other.

Instead, to avoid this, break down your text into different sections and make sure you know what goal every paragraph serves. You’ll then be able to easily find opportunities to make transitions that make sense.

Once you learn the list of transition words and when to use them, try using an SEO plugin to be 100% sure you’re on the right track.

More often than not, we tend to do too much of something or too little. It’s hard to find the balance between not enough transition words and way too many transition words. Moreover, when you write, you get so immersed in your writing that you lose perspective and can’t tell if the idea is clear or not.

That’s why plugins such as Yoast are very useful. Here at BforBloggers we always use it and it helps us a lot.

This is how it looks: 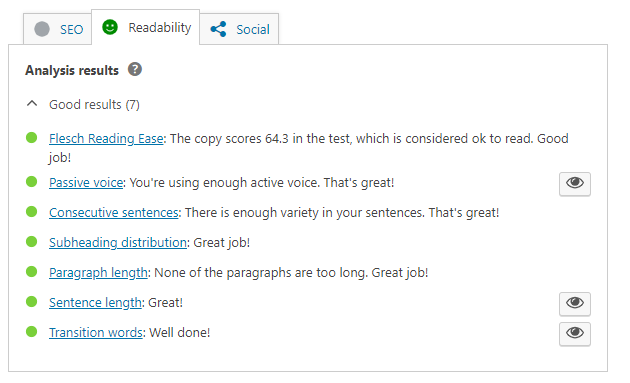 Do your best to keep that good readability and people will keep coming to your site. And with that, search engines will notice you.

Wrapping up, quality writing is as important to SEO as quality content. People want easy-to-read content and that means posts that contain transition words.

Yes, transition words are many and you may forget them but you can always come back to this list!

We’ll be always here to help you improve your writing skills and alongside that, of course, your digital marketing strategies.

Agustina writes for BforBloggers and other blogs in our network, covering SEO and marketing - her articles are info-rich, always to-the-point, and engaging.

Find 50 Ways to Convert the cold website visitors into customers.

SEMrush SEO Tool
If you want an easy way to generate keyword ideas, do a website audit, gather competitor research analytics, and more… try SEMrush. Plus, get 14 day trial for free.

Learn how SEMrush can help you get more traffic

What are you looking for? Search BforBloggers 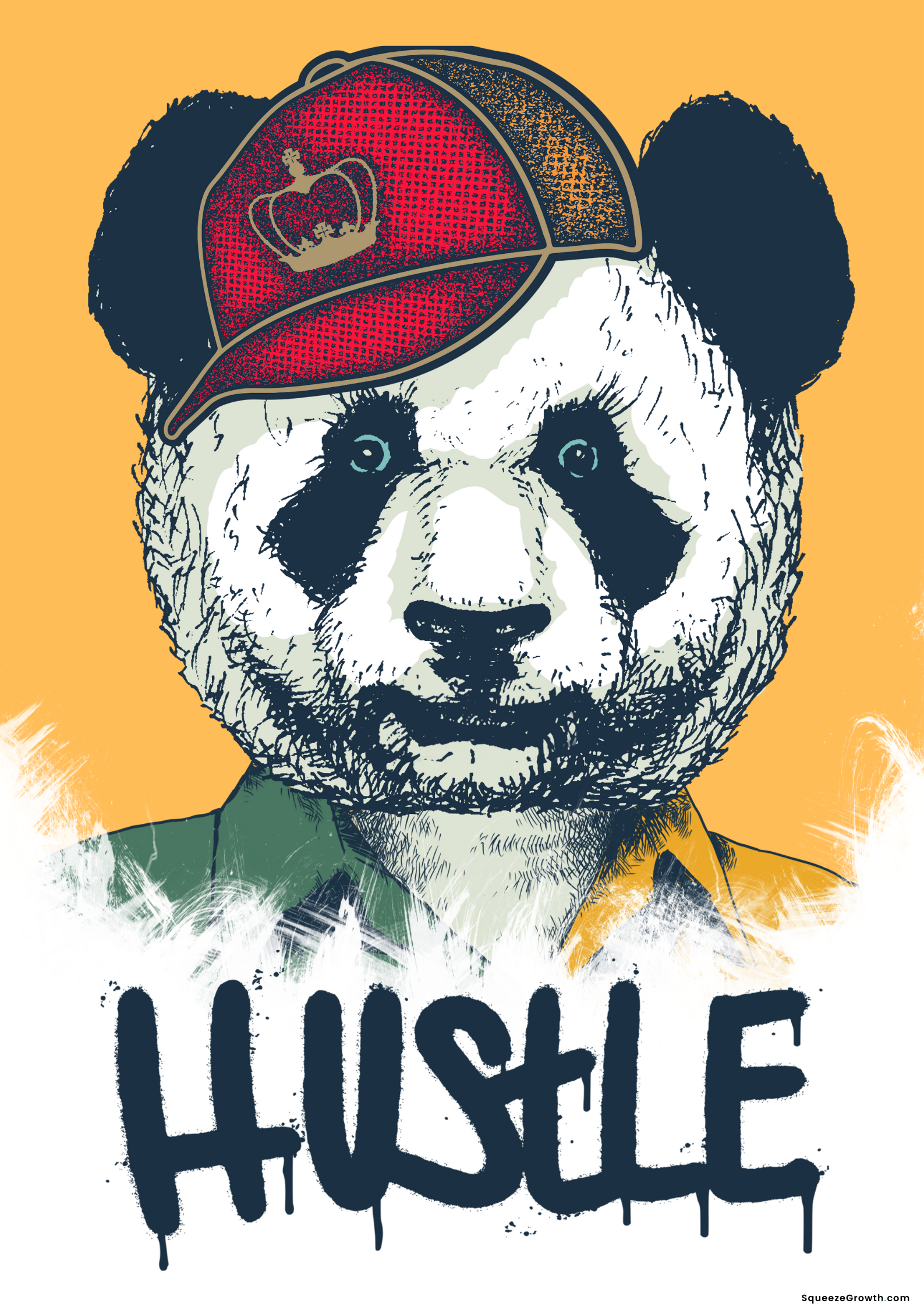 Check out our Merch!

These original, amazing-looking Hustle Panda posters have been the hit among our subscribers.

Add BforBloggers to your Homescreen!